Israeli composer Chaya Czernowin is a compelling figure for the young generation she teaches at Harvard. She is far less-known if France than in Germany, Austria, and Switzerland. Her new opera, Infinite Now, premiered at the Opéra des Flandres, in Mannheim, and then performed in Paris during ManiFeste 2017, can be seen as the sum of her research on music and electronics. Czernowin, or the intensity of an impure music

For the majority of your works, you have a very strong image in mind in the beginning. For your string quartet with electronics, Hidden, there was the presence of a rock, a gigantic stone…

I like to think of music as a form of philosophy. I am not satisfied with the presentation of music as something purely internal, as a simple manipulation of materials, or as the effect of a series of paradigms. Actually, all these things that we find within music are constraints and music goes beyond them. Every time I think of music as a limited field, I want to discover the premises of this field or this forest that goes beyond the limit. The image is not the object, it is not pictorial, it is visual but the visualization of sound. For me, when I listen to any sound, it is a color: a call, a presence, a texture. Music is life, not just a sound frequency or its thematic overtones. The “tangibility” of sound is incontestable.

Faced with the masculinity of war (the First World War in All Quiet on the Western Front), I immediately thought of working with the Chinese author Can Xue because she is a very sensual female voice; not less precise or analytical. As soon as I thought of Can Xue, I had the visual idea that we would have someone really in China. Everything began with this whispering, this murmuring from far away, like the architectural structure of a conversation.

Trailer of the opera Infinite Now realized by the Opéra Vlandereen

You describe Can Xue is a sort of twin voice for you. It could be surprising to hear this voice from China speaking with a story that also comes from far away, the novel by Erich Maria Remarque.

Exactly. I talked for a long time about this point with the playwright. We thought that we should translate on stage—a stage like an empty beach—this vast distance between the Chinese story and the war. Between the two is the opera. This huge distance was really a visual desire but it also determined the way we worked with the sound to truly create space.

You have a precise pre-image and preconception of the space. The challenge of this opera and its difficulty is that it is a collaborative process. Did you expect the director to remain faithful to this original image or did you accept a total transformation of your initial vision?

I have written two operas so far. Pnima has been produced 5 times. Adama/Zaïde will begin its third production in a few months. For this last opera, before each “door” there are 12 seconds of silence and these 12 seconds of silence correspond to darkness. I asked for complete darkness before the door opens and something happens. Beyond that, there are no prescribed movements and I trust the director. There are structural data that are important to keep in mind. If I can offer something very clear and very powerful and I work with someone very clear and powerful, the result is excellent. It is a dialogue, dialectic, and the directors I have worked with like Claus Gut and Luc Perceval, have been extraordinary. I have been lucky to be involved in their choices and opera directors have known how to guide me.

Does the use of electronics change anything in your way of working, of playing, or capturing the space? 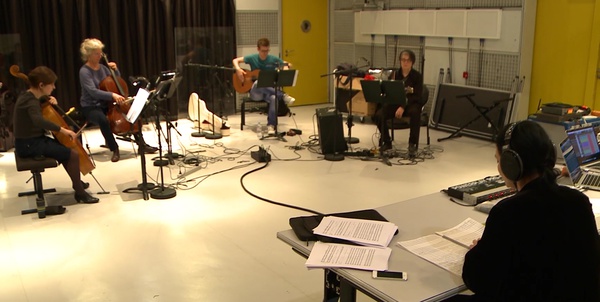 Even when I use the orchestra without adding electronics, electronic music is an influence. It is capital. There aren’t any loudspeakers yet, but the reflection is already in the field. Voices, events, actions, strings all coexist in this field; I must take this into account before manipulating or appropriating them to make them rich, living, and active. In a passage of Infinite Now, we hear the breathing of one person and this has a very physical, a very intimate effect. Then you start to see how this breathing lengthens, only one part of the breathing is a long reverberation. Some of the breaths are quite silent. An entire world will be developed around this breathing, as if it were a symphony. At the exact moment when we have a very suggestive feeling of being close to somebody, we are in an immense space. This physical aspect is connected to the way we work with the sound with the computer music designer.

In a certain way, you create close-ups. The space is vast, yet you try to create a disconnect between the space where we are and the listening space.

For you, the paradigm of polyphony is, in a way, the past. Do you think that music, like sonic art, is part of the visual arts?

I think of interdisciplinary, which is not only an idea of connecting the paradigms of similar artistic forms and connecting them with an artistic form of life. This is what we do today with neurosciences, with biology. Something happens there too between chemistry, biology, and neurosciences; the connection and destruction of boundaries work because we have the technologies that make it possible to see further than with our eyes. We discover strange liaisons of which we were previously unaware.

You often bring up two American composers: Morton Feldman and Alvin Lucier. How are they significant for you?

Morton Feldman is important for a lot of composers and he is certainly for me too, particularly in his final period. He is probably the only composer of his generation, and one of the rare artists, to have never stopped his development. He always criticized his own work. If we take the example of Patterns in a Chromatic Field, the resolution of this work is infinitely greater than those of his works from the 60s, including his concerto for violin. Feldman said that he didn’t ask the sound to do what he wanted, but the sound told him what he should do. This is something that Alvin Lucier shares with Feldman and that I deeply admire. They both created musical structures that developed alone. In a certain manner, I try the impossible by wanting to maintain that vitality of writing that also comes from working with improvisers, from that freedom of expression of the individual.

Is moving outside of concert halls, of imagining sound installations, an interesting path for you to explore?

When we develop as an artist, there is a continual struggle between what we know and what we do, and what we don’t know yet; an adventure that we’d like to undertake with confidence. For years, I was obsessive before meeting other forms of perception of music… When I was an artist in residence in Lucerne, it was the first time I was able to realize my music. Also, I could talk with a lot of people. People came up to me in the street to thank me for the experience they had at my concert. And this gave me a lot of self-confidence. And the result of this was the string quartet produced at IRCAM in 2013. I started to dream big, here is Infinite Now.

Videos realized by the Vlandereen Opera